elcome to the inaugural issue for the SECOND SERIES of REHEAPA of my e-journal, The Shadow Singer. As my contribution journal to Robert-E-Howard: Electronic Amateur Press Association, this issue is part of will feature essays, comments, reflections, and creative content with a centralizing focus upon the achievement of Robert Ervin Howard (1906-1936).

I will be adding to this particular number with a link to many photos from the Centenary Howard Days celebrations at Cross Plains, Texas, in June 2006, but for now, I offer my occasional creative writing feature: "Coffman Street" - named for me, of couse, but also for the former name (and name in Bob's era) of the gravel road that runs by the side of the Howard House. Here are my two latest commemorative sonnets for REH.

(being the creative writing feature of The Shadow Singer) 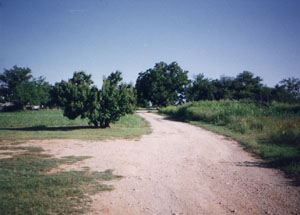 Hard in a land where post oaks stand, amid the rounded hills,
A land where sand roughs build against the fences and low rills,
There lived a lad whose pen gave birth to songs and tales of might,
Whose mind would teem with magic dreams beneath the Texas night.
He wrung them from that rugged land and from his journeys far
Through tomes of treasure-laden lore - led by a different star.
He wove his spells of song among a folk who did not heed,
But kindred spirits read his words. And still those spirits read
Those tales of heroes' hearts and deeds; those songs stark, dark, and grim;
Poems cut like diamonds, yarns to smile at. Yes! we remember him.
But on a day he went his way - that road that all men must -
He set his wondrous arts aside and sought the soothing dust:
This lad who struck grand, golden chords on Homer's rusting lute
And sang strong, still-resounding songs - before his voice was mute.

1) "After the battle of Arbela, a golden casket richly studded with gems was found in the tent of Darius; and Alexander being asked to what purpose it should be assigned, replied, "There is but one thing in the world worthy of so costly a depository, " saying which he placed therein his edition of Homer, the one corrected by Aristotle, which Alexander always carried about with him, and laid under his pillow at night with his sword. " - E. Cobham Brewer, The Dictionary of Phrase and Fable (1898)

2) The basis of all education in the ancient Greek world from the 6th century B. C. on was Homer. The first prerequisite to being a cultivated individual was knowing Homer by heart. Homer was generally esteemed to be the source and sum of all knowledge and wisdom. . . . The Iliad was read as an instruction manual for kings and princes, with invaluable lessons on such matters as war and statecraft. The Odyssey, on the other hand, was studied and revered as an authoritative encyclopedia of information about domestic life and all its necessary arts. Thus, between them, the Homeric poems were considered to contain the sum of all knowledge.

A young man, Life's Road traveling , turns his wandering sight
And peers through mists of rain toward rows of sloping hills,
Forest-shouldered, shadowed, dark and deep - where no sunlight
Breaks through the winter rain, the swirls of mist, to ease the chills
That waft along the February breeze. The dusk-
Dark streams that flow in silence through the sullen trees,
Add to the building image; bare boughs, each dark tree husk
A somber singer through whose branches drones and drees
A growing song, a story whispering through a teeming brain -
And sudden - like a flash of lightning, like rumbling thunder rolled -
A thought springs forth in silence through the drifting rain,
Though day is dim, clear-limned he sees a tale that must be told:
From out the whisping mist, beneath those lowering skies,
Strides forth a mighty man, thick-thewed, with blaze-blue eyes.

*"In February 1932, Howard took his trip down to the Rio Grande Valley, passing through Fredericksburg. While he was in Mission, he wrote the poem "Cimmeria" (at least, so he told Emil Petaja when he sent him a copy of the poem: 'Written in Mission, Texas, February 1932; suggested by the memory of the hill-country above Fredericksburg seen in a mist of winter rain. "). At some time during his stay in the Valley, Conan came to him. "