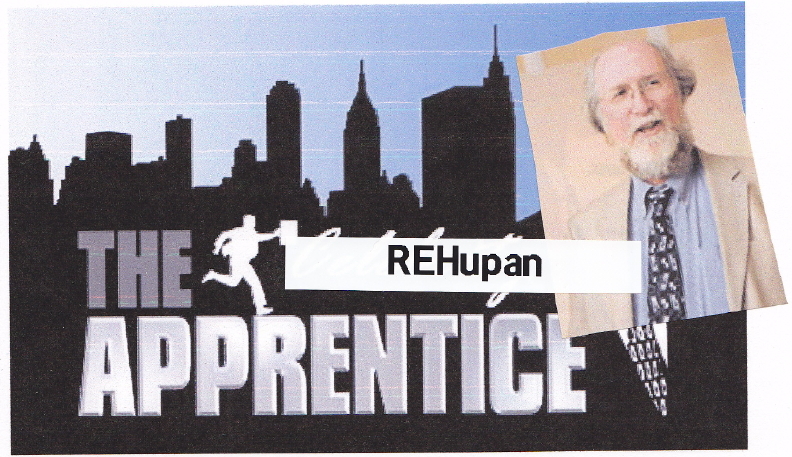 I was struggling for an idea for my 'zine this Sunday while watching Celebrity Apprentice on NBC. I was a little tired from a short hike I did earlier in the day. Since I found out I have Type 2 Diabetes I have been watching my weight a bit and trying to exercise at least 3 times a week. I started nodding off and finally succumbed to nature's remedy for everything. Sleep.

The need for a 'zine and the background noise of the TV show combined to make me dream of a "REHupan Apprentice" event at this year's Cross Plain REH Days. It went something like this:

Rusty Burke was wearing a suit and sitting behind a desk. Somewhat off to his left was his wife Shelly and to his right was Bill Cavalier. In front of Rusty was a group of two teams. Team Pastiche consisted of Darrell Schweitzer, Steve Allsup, (neither of which is a REHupan, but dreams have their own logic), Big Jim Charles, and myself. Team Purist consisted of Mark Finn, Barbara Barrett, and Amy Kerr. According to Big Jim, it was the men against the women.

Rusty gave a quick overview of the past event. There was the "publish a book during the centennial" event. Mark Finn was the project leader for Team Purist and successfully put out a book on Robert E. Howard. He easily won the event putting together a biography that was fair and interesting and that even Team Pastiche had to admit was credible and didn't entirely suck. Darrell Schweitzer compiled an anthology of REH articles and found a publisher, but it is still awaiting print. Team Pastiche lost the event and Steve Allsup was sent home for failing to submit an essay.

Rusty explained the day's event. REH Days needed to expand and be more of an economic boon to the people of Cross Plains. The local restaurant, Jean's Feed Barn, was looking for new sandwiches and dinner plates to entice the locals and feed the tourists. The challenge was to create at least 3 sandwiches or dinner plate specials named after REH characters.

The Team Purist strategy was to appeal to the town folk. Offering Texas fare for the men, salads for the ladies, and something to appeal to the decent Christian folk who had a bad opinion of Robert E. Howard.

Mark Finn created a Breckinridge Elkins plate consisting of a generous slice of Ham, (Mark was putting some of himself into the meal) Pork & Beans, and lots of Corn. The plate was shaped like the state of Texas, on top of which were two bowls. The corn was in a bowl shaped like Robert E. Howard's head and the Pork & Beans in a hat shaped bowl. Mark Finn said this meal was definitely placing Howard firmly in the heart of Texas.

Amy Kerr created a Solomon Kane plate consisting of unleavened bread and a glass of water served on top of a plate inscribed with the Lord's Prayer. It was an austere meal that a good Christian should be thankful for.

I created a sandwich consisting of rare grilled beef piled on top of a thick bun whose bottom was shaped like a women's derriere and top was one large breast complete with protruding nipple. Served on the side were slices of Beef Jerky cut like french-fries. I called it The Conan Real and Pastiche Plate.

Darrell Schweitzer created the Kull Contemplative Sandwich. It consisted of a glass of Red Wine with two slices of bread served on a plate with a mirror like finish. The idea was to drink the wine and then stare into the mirror and imagine what exotic meats and cheeses could occupy the sandwich in other realms.

After presenting the items the judges sounded their pleasures and disappointments. They liked both Mark and Big Jim's plates the best. Both were typical South/Southwest Fare that locals would enjoy. Big Jim would have been the favorite but the white meat chicken overpowered the somewhat generic black beans.

The more trippy entries like Darrell's and Amy's were found to be clever but not really appetizing or something that would actually sell and raise revenue.

Barbara's Poetry Salad was not really named for a REH character as stated in the task. Also the process for making word shaped crispy noodles was too time consuming and costly. My Conan Real and Pastiche Plate was complimented as a good meaty and tasty sandwich but the "bun and tit" presentation was soundly criticized.

The judges had their final say and decided Team Purist was the all-around winner.

Rusty dismissed Team Purist and began the grilling of Team Pastiche. I was the project leader and Rusty centered on me right away.

"What the heck were you thinking with this obviously sexist bun?" He glared somewhat hatefully at me.

I sheepishly said I thought it was a humorous idea and that I thought it would appeal to the mostly male Conan fans. I looked a little hurt and almost tearful.

Big Jim's response was a rant on political correctness run amok. "Belit is white meat chicken and she is surrounded by black beans in the story. What is your problem? Just because I get what REH was saying and you don't, you are trying to censor me!" Big Jim continued on, "You're a good biographer of REH but you don't really understand him." He went on in this vein for another 10 minutes.

Rusty shook his head in confusion and let Big Jim wind down. He turned to Darrell and said, "I liked the cleverness of your Kull sandwich but, like Amy's Kane plate, it wasn't much of a meal. But you're safe, so please leave the room.

Rusty looked at Big Jim and myself and said that he had to fire somebody. He turned toward me and spoke, "I have to admit your rare grilled meat sandwich is satisfying but why the beef jerky on the side, it seems like overkill?"

"Well," I answered, "that is where the "Pastiche" idea fits in. Beef Jerky is kind of hard to chew but still somewhat satisfying and tasty. Like de Camp's changes to REH's text."

Rusty cleared his throat, shook his head, and delivered the axe. "Gary, you're fired!"