A Witch Shall Be Born 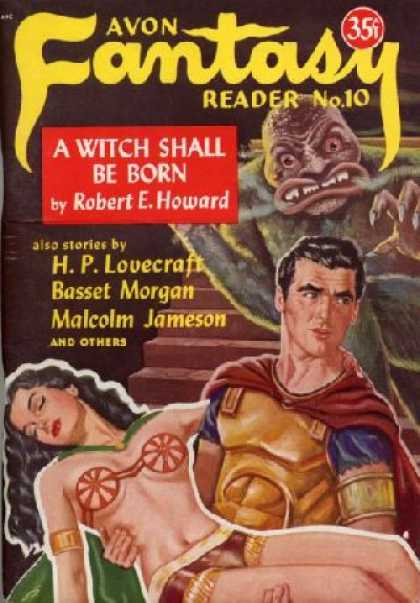 I would be interested to know if there was more than one draft of "A Witch Shall Be Born."  I like this story and feel REH was experimenting a bit with his narrative technique.  The story is told through a diverging sampling of techniques: omnipotent narrator (REH's usual method), character dialog, an epistle to Nemedia, and then back to omnipotent narrator in a fairly fluid motion.

The story opens with Taramis, the queen of Khouran being awakened by an eerie apparition.  It is her twin sister returned from the grave.  Taramis's sister is Salome, the product of a centuries old curse in which a witch is born every hundred years.  Howard writes:

It will always be Salome, the witch, even when the mountains of ice have roared down from the pole and ground the civilizations to ruin, and a new world has risen from the ashes and dust – even then there shall be Salomes to walk the earth, to trap men's hearts by their sorcery, to dance before the kings of the world, and see the heads of the wise men fall at their pleasure."

Clearly this is a reference to the biblical Salome; who demanded that John the Baptist be beheaded.  The biblical verse is quoted below:

[...] the daughter of Herodias danced before them, and pleased Herod.  Whereupon he promised with an oath to give her whatsoever she would ask.  And she, being before instructed of her mother, said, Give me here, John Baptist's head in a charger.

According to the historian Josephus, Herodias's daughter was named Salome.  REH uses this bit of history to good effect; letting the readers know that this Salome is capable of great evil.  REH also lets us know that Salome, though a witch is not much of a spell-maker or conjurer.   REH has Salome say:

[a magician from Khitai drove me from him] saying that I was but a common witch [...] I was only a harlot of darkness.  But what of it?  I could never endure to seclude myself in a golden tower, and spend the long hours staring into a crystal globe...

REH is letting the readers know that Salome is more of an evil mischief maker than a feared sorceress.  More like the biblical Salome.

Salome has planned her return to Khourhan with the help of Constantius, the Kothic voivode of the Free Companions.  He has an army of Shemitish mercenaries camped outside the city.  Salome, pretending to be Taramis has ordered the guards away and orders that Constantius' army be allowed in the gated city.

Constantius, also called the Falcon, is a cruelly handsome man.  Salome chose the Falcon to aid her "because of his utter lack of all characteristics men call good."

The next chapter tells of the taking of the city.  It is told in flashback as narrated by Valerius to his lover, Ivga.  Valerius was a loyal subject devoted to his queen.  He is dumbstruck how she could have betrayed the city and turned evil.  Valerius narrates how Conan, the captain of the guard stated, "This is not the queen!  This isn't Taramis!  It's some devil in masquerade!"  A fight breaks out and Conan is captured.  At this point Valerius' dialog ends.  Instead of starting another chapter, REH goes back to omnipotent narrator mode.

Constantius is having Conan crucified on the Tree of Death.  Constantius gives a pretty labored explanation as to why he is leaving Conan alone on the cross.  The dialog sounds too much like a Grade B movie, "I'm leaving you.  You can't possibly escape.  So I will leave you alone now."    I think this faux paus on Constantius' part would have been better explained in narration than dialog.  It seems a little hokey as is.

Conan, of course, escapes.  The crucifixion scene, outside of Frazetta's covers, is probably the single most famous Conan image.  Conan is rescued by Olgerd Vladislav, an outlaw chief.

Since this story has featured New Testament imagery previously (the Salome reference) it is not much of a stretch to assume REH might be comparing Conan on the cross too Christ on the cross.  Marc Cerasini and Charles Hoffman do just that in their "Starmont Reader's Guide:"

Christ accepted his fate and meekly submitted to his own humiliation, torture and death.  Conan on the other hand, strives against his fate, breaking the neck of a vulture that sought to eat his still-living flesh.  [...]  Howard's message is simply that Christ died on the cross and Conan did not and that one is a lamb and the other a tiger.  The figure of Conan represents Nietzschean life-affirmation while Christian doctrine is primarily concerned with death and the spirtual after-life.

I feel Cerasini and Hoffman were stretching too far.  Howard is definitely using New Testament elements in this story but only in a scatter shot way.  Conan crucified mirrors Christ crucified in direct imagery, and later Salome does a beheading that recalls the John the Baptist beheading; but none of the other story elements mirror any gospel in any way.

It is true that Conan does survive; but he does not change.  The Nietzschean life-affirmation could be appropriate but I do not believe REH was castigating Christ in any way in this imagery.

The next chapter begins as a epistle to Nemedia.  A traveler named Astreas (a philosopher who is a believer in the true religion of Mitra) is writing on the situation in Khouran.  He tells of act of lewdness being performed in Taramis' court.  He tells of cruelty, near slavery, over taxation and other evils.  He tells of the possible opposition and fears Khoran's misery will continue.

Again the point of view changes mid-chapter.  Salome continues to keep Taramis alive so she can torture her.  Her loyal councilor, Krallides,  is beheaded.  It is here that the New Testament imagery ends as well as the changing narrative techniques.  The story becomes a routine actioner at this point.

Conan has recovered from his wounds.  He has risen to second in command.  Due to his success in leading raids (all offstage of course) Conan has recruited many new men loyal to him.  Conan plans to settle his score with Constantius.  Olgerd objects.  Conan breaks a few of his limbs and lets him ride off to live or die.  Conan is remarkably fair (in his own barbarian way) when onstage.  How he feels about killing people in those off-stage raids is something the reader will never know.)

Conan tricks Constantius into engaging his troops in battle while an army of 3000 Hyborians attack the city.  Conan wins the battle.  Taramis is rescued.  Salome is killed by Valerius.  There is a monster named Thaug that makes a brief appearance before being easily killed by Conan's men.

At the end everything is set back aright.  But for Conan:

[...] not all men seek rest and peace; some are born with the spirit of the storm in their blood, restless harbingers of violence and bloodshed, knowing no other path...

Conan sees to it that Constantius is put on the cross.  REH has Conan put forth his philosophy:  "[...] I lived, thanks to circumsances and a stamina peculiar to barbarians.  But you civilized men are soft ... Your fortitude consists mainly in inflicting torment, not in enduring it."